High flyer and the new president of HKUST 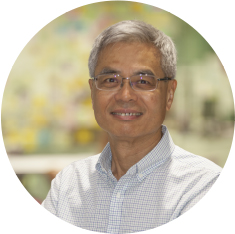 Professor Shyy's own version of his story, from reluctant student to president of one of the world's leading universities, is full of happy accidents and good advice from mentors. He never mentions his hard work or his fierce intelligence. However, those things can be assumed because Shyy has enjoyed a distinguished career at the cutting edge of aerospace engineering. He is sought after in both the academic and commercial sectors, a published author, and the recipient of several awards.

Professor Shyy does, however, admit to a perpetually curious mind. When he began his undergraduate degree at National Tsing Hua University, Taiwan, he was an uninspired student who rarely attended class. However, a curious spirit would not allow him to sit idly. Instead, he read.

As a freshman, one day in the library, he found a book titled "Theory of Flight". Although much of the content was beyond him at the time, he was fascinated by the beauty and elegance of the mathematics and its ability to predict certain phenomena. That was the start of a lifelong fascination with flight, a fascination evident not only in his work but in his love of birds and of avian photography.

Having attained his BSc from Tsing Hua, Shyy went on to the University of Michigan, where he completed his MSE and PhD degrees in Aerospace Engineering, returning later in his career as chair of that same department. Then in 2010, he was offered the position of provost at HKUST. He was intrigued and decided to make the move back to Asia. Very soon after taking the role, he knew he had made the right decision and he was where he was meant to be.

"Hong Kong is a remarkable place and HKUST is a remarkable institution," explains Shyy. "Its founding members were a distinguished and truly dedicated group. They did something very special when they founded the University. HKUST has already come a long way since its inception, but I see there is still great potential."

So what does the next chapter hold for the University and how does Professor Shyy intend to captain the ship? Shyy's plans for the future include establishing particular areas of expertise and earning global recognition in those fields. "We cannot be good at everything, but we can choose a few things and be the best at those," he expounds.

However, Shyy is keen to point out that a university cannot be run like a company, with regulations and targets. He has no intention of dictating to either staff or students. "We are a modern, progressive university with an open mind and independent spirit. That is the heart and soul of HKUST. We simply ask if you are exceptional at what you do. If the answer is yes, we let you get on with it," he shrugs.

Shyy also questions some of the ideals expounded by other institutions. He queries the idea, for example, that we should all be leaders. "Who will follow then?" he asks. Shyy believes that followers also make important contributions and are just as valuable. He is equally dismissive of the idea of social responsibility, not because he doesn't agree with the concept per se, but because he feels it should be a given.

Most notably, grades are not the number one priority in Shyy's mind. "We all know there is little correlation between grades and later success, but we ignore that fact," he says. "My aim is for HKUST to produce happy, self-respecting, contributing citizens. University should treat the whole person. This is where students grow into themselves and mature as people, not just academics. I believe in diversity, freedom, and room to play. All these things are vital to growth."

And how is the success of a university gaged? Professor Shyy believes it is by the alumni. "Our alumni are the proof. We have to be good in order for them to be good. How well our alumni are doing is a direct reflection of how well we are doing. And one sure measure is how connected our alumni stay to the University."

How well our alumni are doing is direct reflection of how well we are doing.

Tellingly, a great many alumni are still deeply involved with HKUST. Over the years, their financial contributions have enabled a number of student initiatives that will make a lasting difference to those involved, from sports to community service to emergency aid, and many more.

However, contributions are not only financial. "Our alumni are role models for our students. Having a positive example and a source of support at this tender age is very powerful. I know that from my own experience," explains Shyy. "Our alumni have so much to offer and we're delighted by the strong connections between alumni, students, faculty, and staff."

A chat with Samuel Wu

A chat with Professor Jack Cheng