Constructing the Future in a Smarter Way

Professor Jack Cheng received his BEng and MPhil degrees at HKUST before becoming a faculty member in the Department of Civil and Environmental Engineering. Today, he leads research at the forefront of an industry playing catch-up in the technology arena. 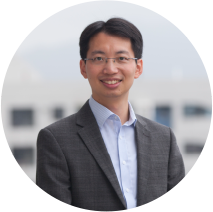 The construction industry is among the least digitized, notes Cheng, Associate Professor in the Department of Civil and Environmental Engineering at HKUST. He gestures at a graphic illustrating the relative digitization of 22 sectors, according to the McKinsey Global Institute in 2016. Leading the pack are ICT, media, and professional services, while construction languishes in second-last place. "The only sector we're more digitized than is the agriculture and hunting industry," he adds with a chuckle.

The construction industry is often associated with an image of low productivity. "There are many opportunities for enhanced efficiency in the built environment, from planning, design, engineering analysis, procurement, fabrication, and construction - all the way to facility management," Professor Cheng states.

"The design, construction and management of buildings and civil infrastructures are fundamentally challenging because each building and infrastructure project is endlessly unique with a fragmented management structure," he explains. For example, while common aesthetics prevail in Hong Kong's public housing, each building's design is unique, once you get down to the finer details. This explains why it is difficult for the construction industry to be automated in the same way as, for instance, the automobile industry or the smartphone industry. "We cannot mass produce buildings or bridges, but there is great potential for improving the built environment with the help of innovation and digital technology."

Digitization, which is gradually transforming the industry, offers many benefits. "We can use simulations to predict situations before a building is constructed," notes the professor. "It might be costly to do real-life testing - for example, I cannot hold a fire drill every week to test out different scenarios. But with a virtual environment, I can do many evacuation simulations at low cost, trying various scenarios to measure their effects. So simulations help us move toward better design."

Virtual models are also useful when it comes to facility management (FM). "Suppose a water pipe is broken. Traditionally, the FM team would need to carry out an inspection, then figure out how to repair the pipe. But with a virtual environment, we can immediately see where the congestion is, what other pipes and furniture are near the damage, and whether the room is big or small. All these help with decision-making."

While building information modeling (BIM) is a major theme of Professor Cheng's research, a better description of what he does would be, as he says, "using computing on the built environment." His research has covered a dizzying array of topics, but they all fit under the umbrella of IT: "With computing, we can integrate BIM, virtual reality (VR), augmented reality/mixed reality (AR/MR), artificial intelligence (AI), geographical information systems (GIS), Internet of Things (IoT), drones, simulations, building management systems, data science, mobile technologies, 3D laser scanning, and so on, across the whole building infrastructure lifecycle."

A better description of what we do would be: using computing on the built environment.

"One project we've been working on is analyzing sensing data on energy consumption; this enables us to see patterns, so we can maintain and operate buildings better," the professor adds. "A previous project involved integrating BIM with IoT, with sensors monitoring indoor air quality and energy consumption. My collaborators and I have been in touch with the MTR and the Airport Authority, and pilot projects are in discussion. Our work has also been used by the EMSD (Electrical and Mechanical Services Department, HKSAR) for smart facility management in one of their buildings."

Professor Cheng is a big believer in academic impact: "I like to know what problems there are in the industry, so we can devote research to providing technologies and recommendations that can be implemented. Hopefully these innovations will soon help create a smarter built environment, including smarter construction, smarter buildings, and smarter campuses."

Besides serving as director of the University's RFID Center, and associate director of the recently established GREAT Smart Cities Center, Professor Cheng maintains a high level of external engagement in the construction industry. He chairs the Construction Industry Council's (CIC) BIM Standards (Phase 2) Task Force, chairs the Autodesk Industry Advisory Board, and is a director of the Hong Kong Section of the American Society of Civil Engineers (ASCE).

The CIC designated 2014 as its BIM Year, and went on to name five BIMers as well as five Young BIMers of the Year. Of the ten awardees, Professor Cheng was the sole academic. And in 2017, BIM made it into the Hong Kong Chief Executive's Policy Address - an unprecedented development, according to the professor, as the policy address rarely advocates the use of specific technologies. This year alone, he says, "The government already has 40 to 50 projects requiring BIM."

Starting this year, the government now mandates BIM for its own projects, but Professor Cheng has been mandating it - for his engineering students - since 2015. "We were the first Hong Kong university to make BIM a compulsory element of the undergraduate curriculum, with the support of the University's CELT teaching development fund," he says. In fact, Professor Cheng introduced BIM at HKUST in 2010, before most other undergraduate architecture, engineering and construction programs in the city. "And last fall, I started teaching BIM at MSc level," he adds.

We were the first university to make BIM a compulsory element of the undergraduate curriculum.

Considering BIM's ability to enable and integrate many other technologies, it is surely only a matter of time for its widespread adoption, which will transform the way the built environment is designed, constructed, managed, and used.

High flyer and the new president of HKUST

A chat with Samuel Wu