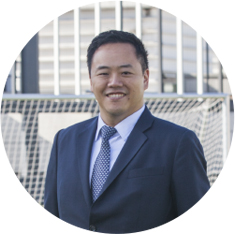 Alumnus Samuel Wu is the co-founding executive director of Malvern College Hong Kong (MCHK), which opened in August with 960 places for both primary and secondary students. Malvern College UK is one of the most highly regarded IB schools in the country, and the new school aims to emulate that in Hong Kong.

In addition to providing quality academic education, Malvern focuses on developing the personality of its students. "We teach children how to be resilient, open-minded, and kind," explains Dr. Robin Lister, founding headmaster of MCHK. "The school recognizes and rewards eleven different attributes to ensure our students emerge with competent personalities as well as outstanding grades."

Students are awarded pins for developing these attributes, whether they lead a debate team, win a trophy, or simply help a teacher carry textbooks. This is what attracted Samuel to the school. "When you acknowledge students for the little things that often go unnoticed, you see their confidence grow, and that helps them perform better academically, too. It's a win-win cycle," he says.

As director of Babylon Education Limited, Malvern College UK's Asia Pacific partner since 2013, Samuel has opened schools in Qingdao and Chengdu as well. "The Hong Kong school is unique because we were awarded a greenfield site from the government and hence operate as a charitable organization."

Samuel is also a board member of Malvern College Chengdu, vice president of the ESF Island School Alumni Association, and director of a school sponsoring body, Shun Tak Fraternal Association.

As passionate as he is about education, Samuel did not start out in this sector. With a dual Bachelor of Arts degree in Economics and East Asian Studies from New York University, he built a successful career in finance and currently serves as executive director of Tridel Capital Group Limited, a family investment fund, and Majestic Elite Property Development Limited in Hong Kong. After the financial crises in 2008, he decided to pursue something more stable and meaningful.

Parents often ask about how Samuel's finance background fits with his current role at Malvern. "Surprisingly, there are similarities between the two sectors," he notes. "In finance, we manage our clients' highly valued assets: their money. In education, we manage something even more valuable: their children. Both require stringent risk management - protecting their hard-earned money, and giving their children a bright future. The stakes are high."

Samuel graduated from the Kellogg-HKUST Executive MBA program in 2012 - a program which has been ranked number one in the world eight times - and attributes much of his success to the pioneering business techniques he learned there. "What HKUST is doing is beyond the times. They're leading the way to the future."

What HKUST is doing is beyond the times. They’re leading the way to the future.

Because of the strong relationship between MCHK and the University, the board at Malvern donated a nomination certificate to HKUST, giving school places to faculty members' children. "We want to show our commitment to our neighbors and share resources with them in mutually beneficial ways," says Samuel.

Looking at the industry as a whole, he acknowledges there are several challenges facing education institutions today. "Firstly, kids are getting smarter. They're born to embrace technology and can obtain information faster than any generation before them. As a result, the competition at university level is more fierce than ever, and it starts as early as kindergarten. That's why Malvern takes it so seriously - we know it's important to get it right from day one," he explains.

Artificial intelligence is another challenge. "Who knows how advanced robots will be 18 years down the road? We need our students to harness technology, so they can program the robots of the future and create better ones. That's our aim."

Samuel believes that for students to succeed in a globalized, competitive world, schools need to take a more well-rounded approach to education. "Children need to be connected with current affairs so they can learn to respond quickly. We encourage students to get involved in what's happening around them."

"Too often, students learn skills for no other purpose than their CV," he observes. "Instead, they should be using those skills to interact with their communities. It's great if they have virtuoso piano skills, but are they playing in elderly homes or teaching underpriviledged children? Universities want students with versatile competencies who are in touch with themselves, their society, and the world."

A great way for schools to provide a broader, more relevant education is to collaborate with other institutions and businesses. "At Malvern, our staff are friends with teachers from other schools and often exchange ideas. We hold activities with partner organizations, so our students can experience the real world."

He also urges parents to include their children in more of their daily lives. "If you work in an office, let your kids come and see you at work. Let them try the photocopier or sit in on a meeting. It's an experience they'll never forget."

Although there is much to change about education, Samuel remains optimistic. "If we keep an open mind and keep learning from our children, we have a much better chance of giving them the future they deserve."

A chat with Professor Jack Cheng